Hard to spell or pronounce (Keen-wa not Kin-oo-ah, as Mr Ethivore keeps telling me), It is all the rage so I decided to investigate. What I found out is fascinating. It was one of those things I had in the back of the cupboard; another grain to eat instead of rice, but now I know more, it will be moved to the front.

Quinoa might be new to us but it a staple food in many areas of South American and especially the Andes where it has been grown and eaten to thousands of years.

We tend to think of it as a grain, but it’s not it’s a seed. It is in the same family as spinach, beets and chard. The leaves are edible too but the bit we eat is the seed. The United Nations, FAO made 2013 ‘International year of Quinoa’ to promote it’s importance as a food crop.

Why is it good for you?

It is celebrated for being of the most nutritionally rich food on the planet, compared with both plant and animal sources. Quinoa is a complete protein food, meaning it contains all nine of the essential amino acids, which cannot be made by the body and therefore must come from food. This is also true of the soya bean (edamame). Making them a perfect source of plant based protein. In the debate around the best source of protein, quinoa and soya win over meat with their added benefit of also reducing cholesterol whilst meat proteins can increase it. It is also rich in omega 3, 6 and 9 fatty acids.

It is easy to digest and good source of calcium, phosphorus, copper, folate, zinc and iron, rich in vitamin B1, vitamin B2, vitamin C and vitamin E. Quinoa is also a good source of magnesium which relaxes blood vessels so provide cardio vascular health. Protects against breast cancer and acts as anti oxidant.

Quinoa has many qualities that make it a weight loss friendly food. It is high in protein and fiber, and has a relatively low glycemic index value.

There are reported to be around 120 varieties of the quinoa plant. We typically eat three types, white, red and black. White being the most common. Red quinoa is more often used in meals like salads since it tends to hold its shape better after cooking. Black quinoa has an “earthier and sweeter” taste. You can also find quinoa flakes and flour which are great for baking. Quinoa is also gluten free so a great alternative to wheat flours.

You can buy dried, raw or pre cooked quinoa. Before cooking the dried version give it a good rinse in cold water, the seeds are coated in a compound that is quite bitter. Follow the instructions on the packet. Typically, add it to the pan with 2-3 times the volume of water, bring to the boil and simmer for 10-15 mins, the water should absorb, the quinoa turns translucent and the little ‘tails’ uncurl when it is ready.

Because quinoa has a fairly neutral taste it is good to use in both sweet or savoury. It makes a nice porridge cooked in 50/50 apple juice and water or milk. You can also cook in stock to give it more flavour if you are eating it as a savoury side dish. Once cooked it can be cooled and stored in the fridge for several days.

The pre cooked version is usually open and serve. They often add oil so it is slightly higher in fat, but handy to have in store and good to check in a salad or when making a quick lunch.

I wouldn’t bother with quinoa mixed with other grains as a source of quinoa, it is a bit of a sales gimmick really, they are often very high in the other product e.g. rice 90%, quinoa 10%.

Is all quinoa the same?

No. The main exporters of the quinoa in the word are Bolivia, Peru and Chile. It is also now being grown in UAE, EU, Canada, basically anywhere it will grow, now over 50 countries!

The champagne equivalent of quinoa is grown in Bolivia; Quinua Real or Royal Quinoa it is grown in the same way the Incas have for thousands of years. It is organic and traditionally grown, harvested and prepared. Soil preparation is fully manual, it’s fertilized with llama dung and pests are controlled using extracts of indigenous plants. Sounds good to me!

Quinoa is big business and where there is big business there are ethical challenges. Reports that the Western demand of quinoa caused a sharp price increase and meant local people could no longer afford it, have been balanced in recent years with reports of improved economic conditions for farmers and communities. Buying Fairtrade or organic approved products is a way to ensure you are supporting an ethical choice. 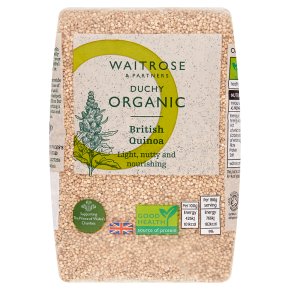 Parting thoughts, as quinoa is grown in the UK and the prices even for the organic version are similar, it seems like a good choice, considering Airmiles, ethical issues and supporting UK farmers.

Long and short is we should add quinoa in our diet because it is easy to grow, highly nutritive, medicinally important, economical and versatile food.

Mmmm cookies.. sorry not the edible type. If you continue to use this site we will assume that you are happy with us using cookies :-).OkNo